In celebrating Women’s History Month, it is intriguing to take a look at some of the great women from our past that have helped to forge a rich and vibrant future for us now. You might be well acquainted with some of the more popular male cartographers in history, including Leonardo da Vinci and John Paul Goode, but there are some lesser-known, yet equally important women in the field who deserve mention and acknowledgment. 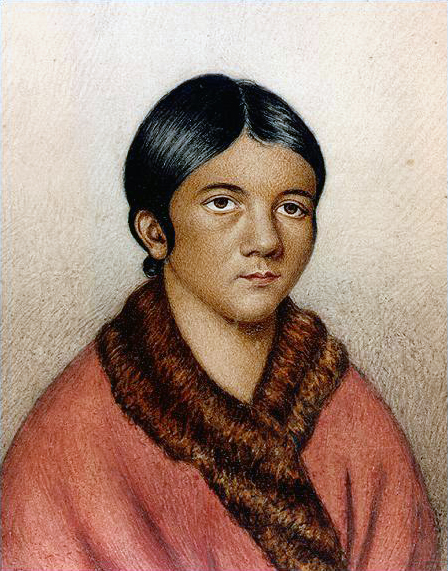 One female mapmaker instrumental to the field was Shanawdithit, who lived in the early 1800s and witnessed the near extinction of her people, the Beowith from Newfoundland, Canada. After finding work as a servant in a white settlement on the island, she learned English and partnered with explorer William Cormack. In 1829, Shanawdithit created five incredibly geographically accurate and detailed maps that plotted the memories of her tribe’s movements. These maps are among the last known accounts of Beowith culture.

(This miniature portrait called A female Red Indian of Newfoundland and dated 1841 by some sources, may have been painted by naturalist Philip Henry Gosse- Source Wikipedia). Shanawdithit, Sketch Number Two, 1829. (The Beothuks, or the Red Indians – shown top.)

With the explosion of cartography in the 17th and 18th century, also known as the Age of Discovery, came a surge in European explorers and settlers vying for territory. In this time, Mary Ann Roque decided to carry on her husband’s prominent London map business, and became a celebrated cartographer in her own right. One of the reasons she has largely gone unnoticed in history is that women mapmakers of her time often used their initials to attribute their work, in order to hide their gender from the public eye. Nevertheless, her contributions to the art and science of mapmaking cannot be overstated.

Above map was most likely was made from A Set of Plans and Forts in America – reduced from Actual Survey by Mary Ann Roque, “Topographer to the Duke of Gloucester,” and first published in London in 1765.

We would be remiss in talking about influential female cartographers if we didn’t mention the contributions of sisters Marie Catherine Haussard and Elizabeth Haussard, who lived around the same time as Mary Ann Roque. The two women were best known for their engraving skills, which they learned from their father. Soon after, they were making a name for themselves with their well-known engravings of “cartouches,” which are the labels that identify the map subject and author. Cartouches are often created with a decorative touch, and Marie Catherine and Elizabeth had a knack for making these creations their very own.

Following in the great footsteps of these accomplished women is VinMaps® founder Suzi Perez, who is an industry leader with a degree in Geography from San Diego State University. Suzi has been working in the field of geographic information systems since 1991 and has channeled her passion for fine wine and geography into a thriving creative business.

Explore the unique maps of VinMaps® today, and discover the unique manifestation of research, development and design that goes into each and every collectible piece of cartographic art.